Buying a home won't get much cheaper 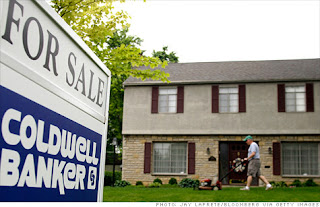 Several housing experts are predicting that this year will be the last chance for homebuyers to cash in on the weak housing market.

According to Money Magazine buying a home may never get any cheaper than this. Several housing experts are predicting that this year will be the last chance for bargain hunters to cash in on the best deals of the weak housing market.

With home prices down 34% nationally since 2006 and mortgage rates at historic lows, homes have never been more affordable -- but it won't stay this way for much longer.

Stuart Hoffman, chief economist for PNC Financial Services (PNC, Fortune 500), said he expects home prices to flatten out by the third quarter and start climbing by next year.

A number of factors will help bolster the housing market, he said, including a decline in the number of foreclosures and continued job growth. In addition, homebuyers will have better access to mortgages as they get their finances in order and improve their credit scores.


Some economists, like Trulia's Jed Kolko, expect home prices to pick up even more quickly. Trulia's data shows that the national average for asking prices already increased 1.4% in the first quarter of 2012, compared with the last three months of 2011.

Read the entire article HERE
Posted by Unknown at 10:30 AM