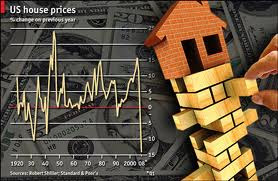 The housing market started off the new year with a thud. Home prices dropped for the fifth consecutive month in January, reaching their lowest point since the end of 2002.

The average home sold in that month lost 0.8% of its value, compared with a month earlier, and prices were down 3.8% from 12 months earlier, according to the S&P/Case-Shiller home price index of 20 major markets.

Read the entire article at CNN/Money
Posted by Unknown at 8:13 AM