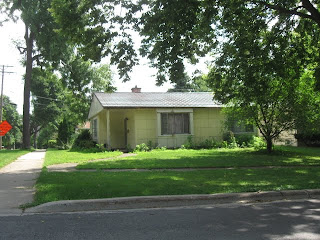 Lustron houses are prefabricated enameled steel houses developed after World War II. They were usually built on a concrete slab, with enameled steel panels inside and out, steel framing and a steel roof.

The pre-fab pieces were brought to the site in a Lustron Corporation delivery truck and constructed by a team of workers who were supposed to complete a house in 360 man-hours.

The Lustron Corporation was based in Chicago. In 1949 they were selling these little homes for an average of $10,500. The homes were popular and can be found in many Chicago suburbs. This one with the "Maize Yellow" exterior is located in Downers Grove, IL.