In an effort to keep at-risk borrowers from losing their homes, Fannie Mae and Freddie Mac announced that they are suspending foreclosures and evictions during the holiday season from November 26 through January 9. The temporary suspension will extend Fannie and Freddie’s recently unveiled mortgage modification program to homeowners who haven't paid their mortgages for three months. Fannie and Freddie estimate that as many as 16,000 borrowers may benefit from the suspension. "With this suspension, seriously delinquent borrowers may have an opportunity to avoid foreclosure and work out terms to stay in their homes," said James Lockhart, Director of the Federal Housing Finance Agency.
Posted by Unknown at 8:37 AM 14 comments: 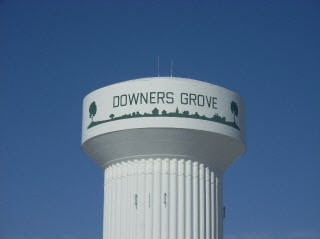 Downers Grove is located approximately 22 miles southwest of the Chicago "Loop" in suburban DuPage County. As of the 2000 census, the village had a total population of 48,724. A 2003 population estimate for Downers Grove saw the population rise to 48,869.
The village is bordered by Lombard to the north, Oakbrook, & Westmont to the east, Darien to the east and south, and Woodridge & Lisle to the west.

Downers Grove offers a unique collection of homes that range from over 100 years of age,to homes of each generation. The last large scale housing developments ended in the 1980s, As of recently Downers Grove had one of the highest teardown/new construction rates in DuPage County, with small older homes demolished and replaced with much larger new houses.

According to the Northern Illinois MLS the median sales price in Downers Grove in the twelve months ending November 28, 2008 for detached homes was $375,000.00 with 204 days on the market, with 351 sales.

Median prices have decreased -7.86% , sales volume has decreased -18.18% and marketing times have increased +43.66% over the previous twelve months.

There are currently 416 active listings of detached homes in Downers Grove. At the current level of absorption of 14.22 sales per month this represents a 29.25 month supply of inventory. This is an oversupply. Housing prices are expected to continue declining until this inventory of surplus homes (excess supply) is reduced to more typical levels.

From the start, the charge and scope of the Chicago Climate Task Force was broad and ambitious. Dozens of experts and a nationally recognized research advisor committee took part in discussions. Leading scientists were consulted to describe various scenarios for Chicago’s climate future and how these would impact life in the city.

The results of the research are both serious and encouraging. They clearly demonstrate that our current trajectory poses risks to our economy and health. They demonstrate that we need to act now to reduce our emissions, while preparing for climate changes that cannot be avoided. We face a big challenge – but we have also been granted a big opportunity. Every Chicago resident and businesshas a role to play in implenting the Chicago Climate Action Plan, which will not only ensure a more liveable climate for the world, but also for the city. The economy and quality of life could improve. Jobs could be created. New technologies will emerge.

The Chicago Climate Action Plan outlines five strategies, which are broken into 26 actions for mitigating greenhouse gas emissions and nine actions to prepare for climate change. The Chicago Climate Action Plan details steps for organizations of all kinds and suggests actions for every individual. The Plan is a snapshot in time -- the actions detailed in the Strategies section draw on current technology and options now available in the market. As new technologies and options emerge, actions may change. The goal, however, remains the same: to reduce our emissions and prepare for change.

On September 18, Mayor Richard M. Daley, joined by businesses, foundations and residents, unveiled the Chicago Climate Action Plan, an outline of bold ideas that could help expand on the City's successes to slow the effects of climate change. Mayor Daley also discussed how City, businesses, residents will play a major role.