Make a New Year's Resolution - get an appraisal

Happy New Year - It's almost 2008 and the real estate market will be much different from anything we have seen before. There will be a lot of available inventory, longer marketing times, and lower prices. Now more than ever, you need to get an appraisal from a certified real estate appraiser.

Taking this chance on New Year's Eve to look back at 2007 I decided to post a few statistics on Chicagoland real estate obtained from the Northern Illinois MLS. In 2007 there were a total of 55,720 detached home sales and 42,785 attached homes and condominium sales. This gives us a total of 98,505 sales in the single family market. On average that breaks down to 8,208 sales per month on an annual basis.

When we say that the real estate market is in "Balance" this means a 3 to 4 month supply of inventory. A 10+ month supply of available inventory is known as an "Oversupply". Expect sales prices to decrease as the market is out of balance, at this time there are more sellers than buyers.

The market has changed and only the most competitively priced homes will be selling soon. How to be sure that your listing is competitive? Get a current appraisal.

Sure it costs $275, however, this is a small price to pay for knowledge that will help you position your house in the current market.

On January 1st we start the long process of our market analysis on the Chicago area. I will be posting the results daily here at the Chicago Real Estate Blog. Check back often I am sure you will find it informative.
Posted by Unknown at 1:04 PM 2 comments:

Need more info on the governments plan to help borrowers, check out this article at Bankrate.com

Hotline for help - an existing hotline that homeowners can call for assistance.

"And let me say to those listening out there: If you are worried about losing your home, call this number, 888-995-HOPE, to see if you are eligible for assistance,"
Posted by Unknown at 11:31 AM No comments:

The point of the article is that as bad as it is out there, things in Chicago are not near as bad as we find in California, Florida and New York. I agree with that, now on to some of the stated statistics.

"To prove a point, the latest data from Standard & Poor's/Case-Shiller home price index shows home prices falling nationally in October for the 10th consecutive month, posting their largest monthly drop since early 1991. But here in Chicago, home prices dropped only 3.2% in October 2007 from October of 2006. This was less than half the record national rate of 6.7%"

Now does this mean your house has only dropped 3.2%? Unfortunately, No.

Statistics are great, they deal with what is called a "Sample" of a "Population", In this case the sample is Chicago homes out of the population of national real estate.

In Chicagoland most real estate has declined in value in the last year, some is still stable and some sub-markets may still be appreciating. The problem with a large sample is it does not zero in on your neighborhood and your property type, which may have reacted to these times in a much different way than the whole of Chicagoland.

So starting January 1, 2008, I will examine the Chicagoland real estate market at the neighborhood level. My source will be the data from the Northern Illinois Multiple Listing Service. Using this neighborhood level sample I will report on Average Sales Prices, Average Days on Market, Absorption Rate, Current Active Listings and the Number of Months of Unsold Inventory.

These detailed statistics will give you a better insight into your neighborhood, and what to expect in 2008.

Sales of New Homes -- Down!

Sales of new homes down to their lowest level in more than 12 years.

"I think you can classify what we are seeing in the housing market as a crash," said Mark Zandi, chief economist at Moody's "Sales and home prices are in a free fall. The downturn is intensifying."
Posted by Unknown at 1:53 PM No comments:

Twelve days of Wright for Christmas 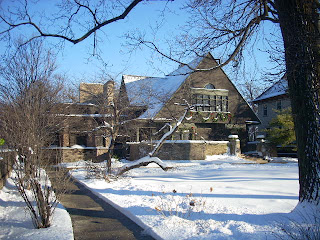 Check out Wright in Chicagoland blog as they follow the 12 days of Frank Lloyd Wright for Christmas with photographs of Wright designed homes in Oak Park, River Forest and Chicago, Illinois.
Posted by Unknown at 10:50 AM No comments: 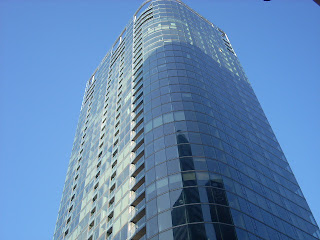 Appraisal on the Near North Side

This morning I had the opportunity to inspect one of the new condominiums at 600 N. Fairbanks in Chicago, Il. 60611

This 41 story building contains 212 units and was designed by Helmut Jahn architect. If you want one, better hurry as 207 units are sold already.

Posted by Unknown at 5:36 PM No comments:

A slow market is perceived as an opportunity by some buyers, as it takes longer for listings to sell. The inventory of unsold listings tends to grow, giving buyers more choice than is the case in a hot seller's market when listings sell quickly.

In a high-inventory market, there are usually fewer multiple offers so buyers can cut a better deal with the seller. However, it pays to be careful about what you buy and how you finance the purchase.

A risk of buying in a slow market is that the value of what you buy might drop before it rises. Or, prices could stay flat for some time, which means that you won't build equity unless you pay down principal on your mortgage. If you should have to move during a time when prices are soft, you might not be able to sell for the amount you paid. To decrease this risk factor, don't buy for the short term.

All good things to consider in today's market.
Posted by Unknown at 5:41 PM No comments:

Who knows what will happen next, check out what Lou Barnes has to say, I am sure $95.00 oil will have its effects.

Beginning two weeks ago, the financial markets began to trade on the prospects for government bailout of a fibrillating financial system. Then, yesterday, new economic data whiplashed them from preoccupation with financial failure to worry about inflation.

Last first. The data surprises: reasonably healthy retail sales for November; a full stop to the rise in new claims for unemployment insurance (i.e., no increase in layoffs); a modest 0.3 percent gain for industrial production; and awful inflation numbers. November CPI jumped 0.8 percent -- 4.3 percent year-over-year -- and the all-important "core" rate rose 0.3 percent, way out of the Fed's 2 percent annual range. $95 oil will have is effects.