The Fifth Annual Historic Chicago Bungalow Expo and Green Home Expo should prove to be the biggest and best Expo yet. It will take place on Saturday, September 30, from 10 a.m. to 4 p.m., at the Merchandise Mart, 222 Merchandise Mart Plaza, 7th Floor - an excellent venue that provides large amounts of space for vendors and visitors.

Visitors of the Historic Chicago Bungalow & Green Home Expo will experience a one-stop shop for bungalow and green home rehab and financing needs. There are over 100 vendors and 50 workshops guiding homeowners on all of their rehabilitation and improvement projects with a special focus, this year, on environmentally friendly and energy efficient products and services.
Posted by Unknown at 10:06 AM No comments: 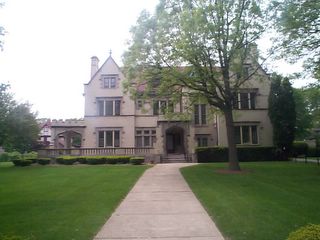 Oak Park has its share of large houses, but only a few real mansions. The Burton Hales House will be open to the public Saturday September 23rd from 10am to 3pm.

The Hales house is currently on the market for sale. $2.95 million will buy you this 9,500 square foot, 21 room, tudor revival home designed by Henry Fiddleke.

Tickets are $25.00 and benefit the Historical Society of Oak Park & River Forest.
Posted by Unknown at 10:00 AM 3 comments:

4 renovations that kill a home's value

As the housing market cools, you need to think twice about these upgrades.

Money magazine says that even in good times "Not all projects have widespread appeal". The risky projects actually may hurt your appeal.

Swimming Pools: In some areas, especially hot-weather spots like Arizona and Florida, a pool is a must-have. In the Southwest, adding one boosts your home's value by 11 percent on average, according to a National Association of Realtors study.

But elsewhere it can just as easily turn off buyers, who worry about affording the upkeep and insurance. And if the most likely buyer of your home is a family with small children, think long and hard before installing a pool.

The Addition: "A badly designed addition can kill your resale value," says Sal Alfano, the editorial director of Remodeling. "People focus on the floor plan and the flow, but not on how it fits into the neighborhood or even the house itself." Watch out for boxy, poorly detailed additions. Proportions matter.

Trendy Finishes: Be careful of a style that will look dated when you throw your open house. Spotting the trend that's on its way out is trickier than you think. While it is easy to assume that sleek red European kitchen cabinetry is tomorrow's harvest gold fridge, other design staples that seem like sure bets can quickly drift into obscurity too.

The Jacuzzi: The elaborate master bath is okay, but the big circular tub with 15 jets that can pulse or massage is risky. Busy boomers have little time to spend hanging out in the bathtub, and parents with small kids prefer a conventional tub. Ultimately, don't expect a future buyer to pay up for the luxury you considered an essential.

Read the entire article at Money Magazine
Posted by Unknown at 1:53 PM 4 comments:

Bond yields rose slightly this week in a long-overdue correction from straight-line decline, but not enough to move mortgages above 6.5 percent for low-fee deals.

A bigger rate rise was intercepted at mid-week by declines in price in the whole commodity complex. Oil has broken to $67, natural gas to $5.71 (60 percent below last winter's spike), wholesale gasoline to $1.63 (retail gas should fall below $2.50 in a month or so), and gold may shortly fall below $600. Oil patch people still say that energy markets are vulnerable on the upside, but I have to believe that the last year's high prices are at last affecting both consumption and supply.

Basic economic data continues to be good: the purchasing managers' service-sector numbers were fine, and there was no increase in this week's claims for unemployment insurance.

The housing market is now the all-consuming economic topic, and "prices are falling" is the everybody-says, everybody-knows factoid du jour.

It's not a whisper-turns-to-hysteria deal. The dominant tone in the prices-are-falling pronouncement is pleasure, often self-satisfied and/or envious: I knew they would fall. Serves 'em right (most common among those who missed the party, couldn't afford to buy what they thought they deserved, or don't much care for Realtors). Every bond trader wants a housing collapse and recession. Stock market types are delighted that housing may finally look worse than their (flat) stuff.

Whenever somebody recites the prices-are-falling mantra, take a second to check content. Asking prices? Upside asking prices are always subject to downward revision. Average or median prices? Those are statistical curiosities moving with the mix of houses sold, saying nothing about the fate of individual homes. Or the real deal: homes that cannot be re-sold for a price paid a year or two ago?

Read more of the Inman News article at Citywide Services
Posted by Unknown at 12:52 PM 1 comment:

Is now a good time to remodel?

Many people think that fixing a house is a sure way to make money. Yet, homeowners are often disappointed when they discover that their renovations didn't add as much to the market value of their home as they thought they would.

There are several factors that determine whether a remodeling project will be profitable. One is that renovation costs and the market value of those renovations vary from one part of the country to the next.

For example, it costs less to replace windows with new, high-end, dual pane windows in the Midwest than it does in the West. But, the homeowner who lives in the West is likely to recoup more than 100 percent of what he invested, while the Midwesterner will probably only recoup about 84 percent, according to the annual 2005 Cost Versus Value Report published each year by the National Association of Realtors in conjunction with Remodeling Magazine.

Another variable is the current rate of appreciation, which also varies over time and from place to place. Generally, the past five years was a good time to remodel. For example, if you had bought a fixer-upper in the San Francisco Bay Area in 2000 and enhanced it with cost-effective improvements, you probably would have realized a healthy profit when you sold in 2005.

Let's say you pay $300,000 for the fixer. According to the Cost Versus Value Report, improving curb appeal (such as adding new siding and windows) and kitchen and bathroom projects have been consistent high-return investments in most markets. So you concentrate your efforts on these high-performing improvements and invest $50,000 in the property.

By making the improvements, you not only enhanced your enjoyment of the property while you lived there, you received an added bonus of more than $80,000 because you received appreciation on a more valuable asset. This assumes that the appreciation rate is constant across different price ranges.

Now that the resale housing market is slowing, does it still make sense to invest in home improvements? Not if you live in an area where the appreciation rate is waning and you're planning on moving again soon. Depending on where you live, you might only recoup 70 percent to 90 percent of the money you invested on renovations at the time of sale if you don't stay long enough to benefit from appreciation.

Read the entire Inman News article at Citywide Services
Posted by Unknown at 10:01 AM 2 comments:

The two-month-long bond rally has hit bottom. It's been fun: From a peak at 5.24 percent, the 10-year T-note made it to 4.73 percent yesterday, which has taken mortgages from just below 7 percent to just below 6.5 percent.

This morning's news that August payrolls had grown by 128,000 jobs was the rally killer -- the economy is slowing, not crashing. Bonds are way ahead of a chance for Fed easing; in the presence of current inflation numbers it cannot ease unless it sees a real threat to economic growth.

We might get some inflation relief from a decline in oil prices. One hint: on Tuesday morning, when Ernesto's forecast changed from Gulf to Atlantic impact, oil prices fell below $70 as soon as markets opened. To have so much money deployed in a weather wager is a reminder that as a betting parlor, the financial markets make Las Vegas look like a Christmas Club. There is an ocean of oil in storage, and the speculative owners may tire of hoarding.

Read the entire article at Citywide Services
Posted by Unknown at 10:36 AM 1 comment:

The Lakeside Development Corporation will be offering its free seminar Homebuyer Education I on September 9, 2006.

Buying a home in today's market can be a confusing process. If you are a first time homebuyer, you need someone who can help guide you through the process and connect you with the information and services you need. In our first time homebuyer workshop, we explain how the home buying process works, how to determine what you can afford, and the pros and cons of different purchase options. We go over common terms, review the importance of credit, and point out how to save money by avoiding high interest and unnecessary fees. This workshop will save you money and it is provided for free.

The seminar will be held at Warren Park 6601 N Western Ave, Saturday at 10am. Please RSVP info@lakesidecdc.org
Posted by Unknown at 10:50 AM 1 comment:
Newer Posts Older Posts Home
Subscribe to: Posts (Atom)