Another Condo Hotel for Downtown Chicago

Here comes another one, the Mandarian Oriental Tower is the latest condo hotel offering. Located one block north of Millennium Park the project will have 250 condo hotel rooms and 150 residential condominiums. Prices start at $500,000.00 for a hotel room and $600,000.00 for a condo.

The complex is located one block east of Michigan Avenue and will have an address of 215 N. Michigan. They are able to use this address as part of Illinois Center.

Just got to have that Michigan Avenue address!

Bond market may be the least of Fed's worries

Two weeks of rates-are-going-to-the-moon concluded in a disorderly reversal late this week. The 10-year T-note fell from its run to 4.8 percent almost to 4.6 percent, which in turn pulled mortgages back from the 6.5 percent brink, now close to 6.25 percent.

The bond market is operating in a Ben Bernanke vacuum. The Federal Reserve Board chairman has thus far not said anything about Fed policy (he will speak on Monday night, content optional), and in a void of that kind the bond market tends to lose its marbles -- descending into complacent snoozing, or panic at shadows. As of last week, deep in the latter, the market had convinced itself that the Fed would raise its rate to 5.5 percent or beyond (after a certain hike to 4.75 percent on March 28), and the 10-year T-note would move quickly through 5 percent.

That panic may turn out to be correct, but in the near term everyone brave or frightened enough to short-sell the bond market had done so by Wednesday. Surprisingly pleasant data then caught the shorts: CPI in February rose a meager .1 percent. Year-over-year CPI is still a tad high at 2.1 percent, but that includes the shock interval to $60 oil. There is some hint of rising wages, but also an off-the-bottom rise in newly unemployed. February industrial production rose .7 percent, but the whole gain came from utility production boosted by high energy prices and some cold weather.

The Legacy at Millennium Park

Real estate around Millennium Park just keeps getting hotter. Sales have started at the proposed 72 story tower in Chicago's Loop. The Legacy at Millennium Park will contain 355 condominium units ranging in price from the mid $300's to $5 million. Check out the Legacy website.
Posted by Unknown at 10:29 AM No comments:

Another week with assignments all across Chicagoland.

Monday's assignment was for a refinance on a 53 year old two story house in Chicago's Mount Greenwood neighborhood. On tuesday it was up north to Beach Park to remove PMI on a 6 year old split level. On wednesday it was back to Chicago to refnanance a loft condominium on the Near South Side. On thursday it was a sale of a gut rehabbed two story in Chicago's North Center neighborhood. Friday to South Holland for a 50 year old bungalow home. And to end the week we did an equity appraisal of a 147 year old farmhouse in Channahon.
Posted by Unknown at 10:12 AM 6 comments:

The Trump Tower Chicago has opened a new sales center on the 20th floor of the IBM building at 330 N. Wabash. Designed to give prospective purchasers a view similar to that of the proposed Trump Tower under construction at Wabash and the Chicago River.

The 92 story Trump Tower Chicago will contain condominium hotel units as well as residential condominiums that range from studio to five bedroom homes. Click here for a PDF brochure.

Check out their website for what is being slated as the hottest thing in River North.
Posted by Unknown at 10:07 AM 1 comment:

February employment data confirmed a solid economic expansion underway, and a new pattern of wage growth on top of energy-price pressure is pushing the Fed from a neutral rate target toward a restrictive one. Late in all Fed tightening cycles the bond market comes to the depressing conclusion that the Fed will keep going forever. It won't, of course, but a market convinced that the Fed would almost be done at 4.75 percent on March 28 now faces a sure-thing 5 percent in May, a probable 5.25 percent in June, and an ultimate stopping point higher than that.

Reade the entire Inman News article at Citywide Services
Posted by Unknown at 9:58 AM 1 comment:

Long-term Treasury rates broke out of a month-long range…upward, and today above last November's two-year high at 4.68 percent. Mortgage damage is modest for now, fixed-rate loans still within sight of 6.25 percent, but we are going higher.

The source of pressure is global, having nothing to do with new domestic economic data. The rate rise on Thursday was, if anything, limited by weakish news: February retail sales disappointed, consumer confidence continued to sag, home sales slid for the fourth-straight month, and long rates rose anyway.

Global: the European Central Bank raised its cost of money for the second time, from 2.25 percent to 2.5 percent, and signaled that more hikes are coming. Inflation in Germany is running 2.7 percent; all modern central banks are trying to hold it below 2 percent.

Global: Japan's consumer prices appear to have risen for the first time in a half-dozen years. During that time the Bank of Japan has kept the cost of money at zero, trying to get out of a deflationary spiral that began 15 years ago. The BOJ this week said that it will soon reinstate a cost of money –- no matter how low, a shock.

Yields rose on all bonds everywhere in response to these changes in foreign central bank outlook, German 10-year bunds to 3.6 percent, and the 10-year JGB to 1.64 percent (after years and years 1.5 percent or lower).

Another week in the life of an appraiser. This week I had six residential assignments. The purposes of these appraisals were as varied as the properties and neighborhoods they were located in.

Monday I inspected a condominium in Chicago's Streeterville neighborhood. This combination of two units was being appraised for estate purposes.

On Tuesday the assignment called for the appraisal of a 113 year old home in the Lincoln Park neighborhood. Located in a red hot area of tear downs and rehabilitations, this home had been completely gut renovated and had an appraised value of 2 million. The purpose of this appraisal was a refinance.

My next job was for an older single family home in Evanston. The purpose of this appraisal was to establish market value prior to listing the house for sale.

On Friday it was to the Lakeview neighborhood for a high rise condo facing Lake Michigan, then on to Roscoe Village in the North Center neighborhood to inspect a tear down property for a builder.

On Saturday I had one appointment at a single family home in Chicago's Edison Park neighborhood. This is another red hot teardown market. The purpose of this appraisal was to remove private mortgage insurance.
Posted by Unknown at 3:35 PM 5 comments: 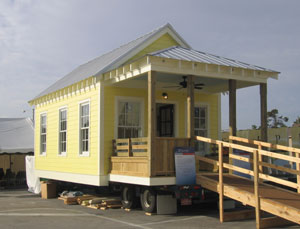 Modular Housing for the Gulf Coast

The cute, cozy proposed alternative to the Federal Emergency Management Agency hurricane relief trailer along the Mississippi Gulf Coast could also be a huge boon to the second home and retirement home markets around the country.

Representatives from the Mississippi rebuilding effort have begun a huge recruiting effort to bring builders, suppliers, interior designers, developers and architects to the state's 11 coastal communities to help put its hurricane-devastated coastline back together.

Officials say they can build the cottages for $30,000. With help from pre-fab companies that specialize in modular and manufactured homes, coupled with the efforts of conventional "stick" builders, the structures can be put together quickly for about the same price as the temporary trailers deployed by FEMA for emergency housing.

Read the entire Inman News article at Citywide Services
Posted by Unknown at 11:08 AM 2 comments:

Mortgage rates are still within a closing-cost argument of 6.25 percent, held stationary by 10-year T-notes locked in trading between 4.5 percent and 4.6 percent.

The bond market is in a total standoff: fears of an overheating economy and energy-pushed inflation are matched by belief that a rapidly cooling housing market will slow the economy. In the slowdown equation, it doesn't matter how high the Fed pushes short-term rates; the farther it does, the quicker and more the economy will slow, and the more money that owners of bonds will make in the slowdown.

Fed Chairman Ben Bernanke says GDP growth this year and next will be in the 3.5 percent range. If so, with unemployment low and falling, energy price pressure still high, a 5 percent Fed funds rate (up from 4.5 percent today) would be the soul of prudence. PIMCO, the giant of bond-market mutual funds, fee-fie-foe-fums that GDP will slow to 2 percent before the end of 2006. If the economy is in the early stages of that slowdown, then 5 percent Fed funds would be an even-money recession bet.