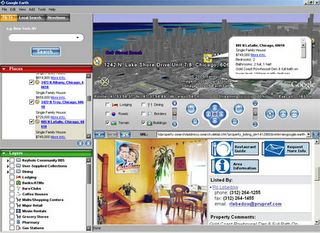 Posted by Unknown at 7:30 AM No comments:

Now you can use the power of Google to search for Chicago Real Estate!

Prudential Preferred Properties has launched a plugin for Google Earth along with a Google Maps interface that will both allow you to search MLS listings in a manner never before possible.

Mortgage rates are still in the same narrow band they've been in since the holidays: 6.125 percent, plus or minus a debate about closing costs, but no points and no origination fee.

This narrow range should not be confused with stability.

In the last two days, concerns about Iran have overwhelmed everything; but, before laying out the market implications of that one, everything else first.

At the top of the list of standard economics is the standoff between the bet on economic slowdown and the one that all is well. In late December, bond yields fell in growing belief that a slowdown was inevitable, the Fed was not merely going to stop its campaign but would have to reverse, and the only question for 2006 would be how steep the slowdown. Everybody else -- economists, stock-market heroes, small-business execs -- disagrees.

The bond (and hence, mortgage) market is stuck, waiting for data to show who is right. On the good-news side, December industrial production rose .6 percent, on target, and capacity in use rose to 80.7 percent, the best figure since 2000. New claims for unemployment insurance fell a surprise 36,000 to 271,000, also the best number since 2000. The slowdown side expects an abrupt cooling in the housing market, and the newest data supports a cool-off: December housing starts fell twice as far as the already-weak forecast, down 8.9 percent, and new permits fell 4.4 percent.

On net, the week's good-news-bad-news data were a standoff.

Read the entire Lou Barnes article at Inman News
Posted by Unknown at 10:32 AM 2 comments:

How to maximize tax savings on second home

If you or someone you know is among the millions of taxpayers who own a secondary residence, you can maximize tax savings from your vacation or second home. Depending on your personal use time, a bit of advance tax planning can result in saving hundreds or even thousands of tax dollars.

Read the entire Inman News article.
Posted by Unknown at 9:44 AM No comments: 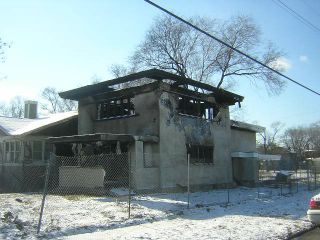 One of the last remaining examples of Frank Lloyd Wright's venture into precut homes was destroyed by fire January 9, 2006. The Wilburt Wynant House at 600 Fillmore in Gary, Indiana was an example of a American System Built Home. At the time of the fire the Wynant House was in the process of restoration by a nonpofit group.

I drove out to Gary this afternoon to see what remains of the Wynant House. Fire has gutted the entire structure. It would be nice to believe that it could still be saved, but I think its a total loss.

Preservation Online noted that the two-story stucco house was one of only 11 of Wright's American System-Built houses, an affordable modular line the architect produced with the Wisconsin-based Richards Co. The Wynant House was the last model of its kind.

Read the entire Margaret Foster article at Preservation Online
Posted by Unknown at 10:35 AM No comments:

Nearly three decades ago, hardwood floors were the absolute rage. They were the first home features highlighted by real estate salespersons and the most popular "standard" item builders would include in mid-level construction packages.

Hardwood floors may no longer be on the leading edge of home design but agents say quality and durability will continue to outsell trendy every time in residential real estate.
Mark Nash, a Chicago-based Coldwell Banker broker and real estate author whose book "1001 Tips for Buying & Selling a Home" is a helpful guide for consumers considering the residential market, has compiled a list of what's "in" for housing this year--and what is definitely "out." The list is a result of input from Realtors from around the country who, in turn, have solicited feedback from home buyers and sellers as they visit resale and new homes.

Leading the "out" column has nothing to do with tasteless interiors or boxy exteriors. Topping the chart is any more discussion about a possible housing bubble. Most analysts--including David Lereah, the National Association of Realtors chief economist--concur that no national bubble exists, that any bubbles must be regional, and point to poor local employment figures as the reason. There will be flat appreciation in some areas but sales will remain strong nationally.