A look back at 2005's biggest real estate news

Ringing in the New Year by peeking at the past

The devastation of Hurricane Katrina clearly was the leader in more than the real estate category. Thousands of residents losing their loved ones, homes, jobs and dreams became reality for one of the more popular areas of the country. Scores of Gulf Coast people continue to live in hotel rooms and trailers. The uncertainty of how, when, and where to rebuild will continue for countless months for many families. May the spirit of the Christmas season bring renewed hope to all hurricane victims.

Certainly rising interest rates made news this year. The prospect of higher home-loan payments began to slow sales--and investor speculation--in many markets. When monthly mortgage costs leap to levels that cannot be countered by higher rents, low-down payment landlords would rather walk away than sell for a loss.

Despite what you might have heard, the Federal Reserve's 12 moves to lift rates did not cripple sales in many popular owner-occupied neighborhoods. That's because consumers, spoiled by a terrific borrowing environment for the past three years, often jump down off the fence and buy when rates rise in an effort to catch rates before they move even higher. Home-loan rates, expected to rise considerably by the fourth quarter of 2005, finally did so; yet they were bouncing lower at the end of November than they were at the end of October.

Its slowing up for the season. This week was quiet, my first inspection took me to the village of Plainfield for a land appraisal. This former residential site is in the path of commercial development. Next I was in the Ashburn neighborhood of Chicago for a single family home and I finished my week in Wilmette with a much larger single family home.

The village of Wilmette shows very well in the Holiday Season with it's brick streets, mature trees and historic homes.
Posted by Unknown at 11:10 AM 3 comments:

There are always a few uses for an old aircraft!

Francine Rehwald is buying an old 747 from Mojove, chopping it up and hauling it to a building site in the mountains. The house will resemble a aircraft crash site. Plans call for six buildings including a "Meditation Temple" constructed out of the nose.

Reade the article in the Wall Street Journal
Posted by Unknown at 3:05 PM No comments:

With the holiday's approching you woul think that the appraisal business would start to slow down.

Monday I needed to complete the appraisal of a six flat apartment building in Mount Prospect. Then on to complete a single family home in Chicago's Austin neighborhood. Wendesday I was off to the South Shore neighborhood for a gut-rehabbed condominium. Thursday morning I had a sale of a new construction condo in Lincoln Park. As 6" of snow fell in the afternoon I was off the the Village of Berwyn for a single family home. My week ended Friday afternoon with the appraisal of a single family in the Village of Bensenville.

Even when its slow I get around.
Posted by Unknown at 12:15 PM 5 comments: 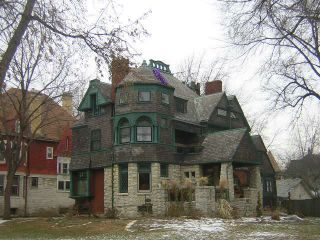 Posted by Unknown at 9:53 AM No comments:

Located in Chicago's Austin neighborhood this Queen Anne styled home was built by architect Frederick Schock as his personal residence in 1886. Schock lived in this house until 1931. Known as the "Empress of the Queen Annes" it was designated a Chicago Landmark on January 20, 1999.
Posted by Unknown at 9:47 AM 2 comments:

The Historic Pullman Foundation invites you to celebrate the holiday season in Pullman at our annual Candlelight House Walk.

The self-guided walk features historic Pullman homes decorated for the holidays, a buffet of hors'doeuvres and desserts at our Visitor Center. A silent auction will also be held.

Reservations are required by December 8. Tickets are $25 per person (includes tour, hors d'oeuvres and desserts). To make your reservation:By phone - call 773.785.8901 (between 11-3 Tues-Sun) or call the Visitor Center for questions and tickets at 773.785.8901 or email foundation@pullmanil.org.
Posted by Unknown at 9:14 AM No comments:

Home-price slowdown could have strong impact

The 10-year T-note could not hold its pre-Thanksgiving rally to 4.4 percent and is now back above 4.5 percent; that trade eliminated the chance for mortgage decline toward 6 percent. Fixed 30-year deals are now back at the 2005 high, 6.375 percent.

Despite these retracements, the "topping" pattern in long-term rates is still in place. The Treasury 2-to-10 spread is still .1 percent or less, and at one point last week the 5-year T-note yield was slightly under Treasury 2s and 3s. That brief and minor "inversion" (a long-term rate under a shorter-term one) is a precursor for a larger and more significant one likely to develop in the next 60 days.

The Fed will go to 4.25 percent on Dec. 13, and most observers expect 4.5 percent on Feb. 1 -- if the 10-year stays put, that would mean no spread at all from overnight money to 10 years. The Fed, of course, never wants to be caught as the cause of a slowdown of any kind, and so argues that the inversion developing now has external, different-this-time cause. Don't believe it.

Read the entire article at Inman News.
Posted by Unknown at 4:34 AM 5 comments:

Six victorian homes dating from 1874 to 2000 will be open for viewing this Sunday December 4th. Five of the homes were built during the 1880's and one was built in 2000. The Hinsdale Center for the Arts is the sponsor of this housewalk www.hinsdalearts.org, the hours are from 1 to 5pm. Tickets are $35.00 at the door. The housewalk will begin at 8 E. Third Street in Hinsdale.

Guests are invited to walk through the main floors of six Hinsdale homes, all Victorian in style. Some are originals dating from the 1800s while others are skillful re-creations. Each will be richly decorated for the holidays, glittering with lights, echoing with carols and music. Homes on this year’s tour are all within walking distance of one another and each features a distinctive Yuletide theme:

Home for the Holidays at 210 South Lincoln Street

Christmas at the Cottage at 104 East Fourth Street

A Touch of the Orient at 412 South Washington Street

An Equestrian Holiday at 513 South Garfield Street.
Posted by Unknown at 9:52 AM No comments:
Newer Posts Older Posts Home
Subscribe to: Posts (Atom)