Board president to hold position for another year

The Multiple Listing Service of Northern Illinois (MLSNI), the largest real estate listing service in the Chicagoland area, recently announced the election results for its board of directors.

The MLS has been at the center of controversy this year, undergoing an expensive forensic audit, terminating its CEO and losing certain listings from some top brokers in the area. It is one of the largest Realtor-owned and operated MLSs in the country.

Americans expected to spend more, save more in '05

Consumer confidence posted modest gains in November despite high energy prices, rising interest rates and persistent concerns about job growth, according to the latest University of Michigan Survey of Consumers.

"Consumers are both confident enough to spend more as well as cautious enough to save more in 2005," according to Richard Curtin, the director of the survey.

Overall, the data indicate that real consumption spending will grow by 3.25 percent in 2005; the rate of saving out of disposable personal income will increase to 1.25 percent by the end of 2005, up from its all-time low of 0.4 percent in the third quarter of 2004. Consumers expected a slower overall pace of economic growth during 2005, and as a result anticipated only small additional declines in the national unemployment rate.

Posted by Unknown at 1:03 PM No comments:

One-year Treasury-indexed adjustable-rate mortgages averaged 4.27 percent this week, with an average 0.7 point, up from last week when they averaged 4.17 percent 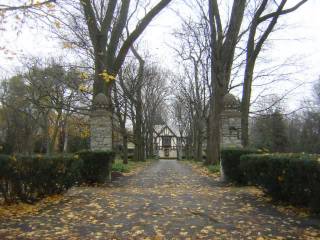 R. Harold Zook, noted architect of the 1920's, 30's and 40's. He is most famous for his Cotswold Style homes. Zook also designed buildings in the Tudor and Georgian style.

Zook's designs can be found throughout the western suburbs of Chicago, as well as Iowa, Wisconsin, and as far as Tennessee. Eighty-one buildings have been authenticated as Zook designs, many are in suburban Hinsdale. It was once said that R. Harold Zook is to Hinsdale as Frank Lloyd Wright is to Oak Park.

Posted by Unknown at 4:49 PM No comments:

Existing, single-family homes edged down from September to October, while the national median price increased only slightly, the National Association of Realtors reported today.

Posted by Unknown at 9:22 AM No comments:

Based on information received in January 2004, HUD began an investigation into the development of The Broadway, a high-rise building with 80 luxury condominiums in Falls Church. To have the property rezoned for the construction of condominiums, the developers proposed a term sheet that calculated school-impact contributions based on the number of children who would move into the property instead of on to the number units developed. The City of Falls Church initially approved of this arrangement.

Because of concerns regarding the arrangement, HUD commenced a Secretary-initiated investigation against the developers of the property and Falls Church. The Virginia Fair Housing Office, which receives funding from HUD, also reviewed the matter.

The city determined that should the escrow account be funded, it would possibly create the appearance that the City condoned discrimination against families with school-age children. In January 2004, the Falls Church City Council amended the term sheet to remove the school impact fee arrangement and reaffirmed its commitment to fair housing.

On May 17, 2004, the Equal Rights Center, a non-profit fair housing group based in Washington, D.C., filed a complaint against Waterford Development, Waterford Development Falls Church, Nova-Habitat, McWilliams/Ballard, and the City of Falls Church. ERC's complaint alleged that the respondents had violated the Fair Housing Act by discriminating against families with children.

Mortgage rates are still holding against pretty good October economic data, and against the Fed's obvious intention to raise its interest rate at least another percentage point as quickly as it can.

October industrial production doubled its forecast increase, up .7 percent, as did industrial capacity in use, up to 77.7 percent. October CPI and PPI core rates were just under control, up .2 percent and .3 percent respectively, but the energy-distorted nominals soared .6 percent and 1.7 percent.

Posted by Unknown at 1:12 PM No comments:

Rates are current as of 7:15 p.m. Eastern Standard Time.

The November HMI registered no discernible change in builder attitudes following an impressive four-point jump that brought the index in line with its highest level of the year, at 71, in October.

Home sales momentum will continue through the remainder of 2004 and into next year, the National Association of Realtors forecast today at its annual conference and expo in Orlando, Fla.

Existing-home sales are projected to rise 7.3 percent this year to 6.55 million compared with the previous record of 6.1 million in 2003, according to NAR. The group also expects 6.3 million existing-home sales in 2005, which would be the second highest on record. New-home sales this year will surpass the previous record of 1.09 million in 2003 with sales rising 7.7 percent to 1.17 million. A total of 1.07 million new-home sales are predicted for 2005.

Posted by Unknown at 9:54 AM No comments:

Sales of new single-family homes in September were up from August sales, while the median price dropped 5.7 percent, the U.S. Census Bureau and U.S. Department of Housing and Urban Development announced today.