There is No bubble in High End real estate

Mr. Real Estate specializes in High End waterfront property on Florida's west coast. He tells us his views on the bubble myth.

It,s not really a bubble, but prices will level off eventually, and may even lower in some markets. Next year the National Association of Realtors expects housing to slow somewhat, and rates here in the U.S. should go up to around 6.8 percent by year's end, says Fannie Mae.

As rates go up, as I've said all along, housing will begin to level off, but as builders continue to build we should be fine. When builders slow in building new construction, that's the first sign of a housing slowdown. Housing will be back to normal when rates get back to 8 percent, I predict, but the bubble is a myth created by the media.

Prices are high because more people are buying and paying the prices, but it would only be a bubble if the same people buying now wouldn't be able to buy at 8-9 percent interest rates. In my specialization area, luxury waterfront, this is simply not the case.

Posted by Unknown at 9:49 AM No comments:

When will the Bubble Burst?

We hear a lot about the real estate bubble in the Chicago market, but how about these prices .

Prices for residential housing rose 13 percent during the first nine months of this year compared with last year, the China Daily also reported. Meanwhile, the Financial Express reported that an apartment in Delhi that sold for $61,403.51 in U.S. dollars earlier this year now fetches about $87,719.30 -- a gain of 43 percent.

"The growth rates are steeper in the suburbs. And it's not just Delhi that's seeing this boom," the Express reported.

It seems that everyone is worrying about the real estate bubble.

Sales of new single-family homes in September were up from August sales, while the median price dropped 5.7 percent, the U.S. Census Bureau and U.S. Department of Housing and Urban Development announced today.

Sales of existing single-family homes in Illinois were down 3.3 percent in September from the same month a year ago, while prices continued to increase, according to the Illinois Association of Realtors latest survey.

Posted by Unknown at 9:07 AM No comments:

Long-term mortgage rates eased this week, according to surveys released by Freddie Mac and Bankrate.

Wave of optimism pushes up index

National Association of Home Builders and Wells Fargo today reported a surge in builder confidence in the real estate market in October.

The builders' group, in a monthly survey of home builders, asks builders to rate current sales of single-family homes, prospects for sales activity in the next six months, and traffic of prospective buyers. Scores from the survey are used to calculate a seasonally adjusted index, the Housing Market Index. In this index, any number above 50 indicates that more builders view sales conditions as good while fewer builders view sales conditions as poor.

Builder confidence in current sales activity reached 78 in October, a five-point gain over the September index. Builder confidence in expected sales over the next six months reached 84, up nine points since September. And the traffic of prospective buyers rose to 54, or two points higher than the September index. The index for builder confidence in current single-family home sales and future single-family home sales over the next six months were at a record high for the year, while the index measuring traffic of prospective buyers was down from a high of 56 in August. And the overall index of 72 for October 2004 equaled its October 2003 level.

Posted by Unknown at 9:20 AM No comments:

Adoption of technology picks up among MLS's

Stewart Title offices that implemented the company's SureClose transaction management system as a way to better manage the settlement process have discovered at least one other benefit: They no longer need piles of paper files.

After a decade of flops and technology disasters, transaction management systems today are finally starting to reach a broader segment of the real estate industrybeyond settlement service providers. Real estate agents, brokers, lenders and even multiple listing services are examining the potential gains the technology could bring to their businesses.

The Department of Housing and Urban Development today announced that both Fannie Mae and Freddie Mac met their housing goals in 2003.

As mandated by The Federal Housing Enterprises Financial Safety and Soundness Act of 1992 (FHEFSSA), HUD is required to ensure that Fannie Mae and Freddie Mac operate in compliance with their charter purposes, which include targeting a percentage of their business toward low- and moderate-income families, and residents of communities underserved by mortgage credit. Families are considered as having low or moderate incomes if they make no more than the median income in their local area.

"While the GSEs (government-sponsored entities) met the affordable housing goals in 2003, they must do more to genuinely lead the mortgage finance industry as Congress intended," said HUD Secretary Alphonso Jackson. "HUD is now finalizing new housing goals, which over the next four years, will push the GSEs to do what is expected of them helping low- and moderate-income families at least at the same percentage levels as primary market lenders."

Posted by Unknown at 1:27 PM No comments:

John Van Bergen was an Oak Park native who worked as a draftsman in Frank Lloyd Wright's studio. When Van Bergen received his architect license he designed homes in the Prairie Style. His work is often thought to be that of Wright.

The Allen Miller House is located in Chicago's South Shore neighborhood and was built in 1915. It is the only surviving building in Chicago by Van Bergen.

Posted by Unknown at 3:34 PM No comments: 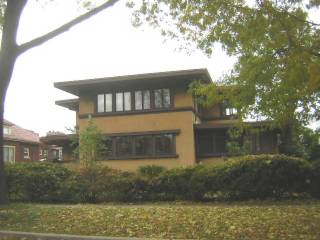 Posted by Unknown at 3:33 PM No comments:

A nationally recognized expert on the real estate industry told the Real Estate Services Providers Council Inc. (RESPRO) audience Wednesday that there will be a "sharp contraction in the real estate market next year and into 2006, when mortgage rates rise above 7 percent."

Weston Edwards, PhD., a consultant to some of the largest real estate brokerage firms, title companies and mortgage lenders in the nation, pointed out that the "contraction in home sales" will occur as interest rates rise and current "homeowners won't want to give up their low-rate, non-assumable mortgages."

"Major realty firms and homebuilders will use this period to dramatically improve market share, taking advantage of failed competitors and making acquisitions," Edwards said. "Realty firms will push for improved mortgage lending services, title and homeowners insurance to offset their realty brokerage losses. And, many marginal agents will leave the business, which may result in a slowing of the current commission erosion."

ForeclosureTimes.com will be "open to everyone, but in tune to the needs of financial institutions and brokers, which sell the majority of foreclosed homes in the U.S.," said Colby Sambrotto, COO of ForSaleByOwner.com. The service aims to save on marketing costs for banks and real estate agents.

Banks and real estate agents will be able to upload their listings for free at ForeclosureTimes.com. The Web site currently has about 300,000 listings, according to Sambrotto, and nearly financial institutions are selling 65 percent of the listings.

Consumers can search the company's database of foreclosed properties for $24.95, and they can access service directories, home inspectors, title companies, real estate lawyers and discount mortgage companies through ForSaleByOwner.com.

Ten people were arrested Thursday on federal charges in connection with a mortgage fraud land-flipping scheme that involved about 200 properties and $15 million in fraudulently obtained loan proceeds.

U.S. Attorney Michael J. Sullivan announced that a federal grand jury returned an indictment against the 10, charging them with 62 counts of wire fraud and one count of conspiracy to launder money. According to the indictment, several of the defendants allegedly purchased distressed properties within low-income neighborhoods and then resold them rapidly at artificially inflated values between 1998 and 2002.

The prospective buyers were then referred to mortgage brokers who also were allegedly involved. Since many of the prospective buyers could not financially qualify for loans, the defendants allegedly generated and then processed fraudulent loan applications and other documentation to obtain loans for the buyers. The false documentation included bogus down-payment information, fraudulent income information and false documentation to show improvements to the properties that were never made.

The defendants also allegedly used appraisers to generate false appraisals for the artificially inflated property values. In exchange for participating, the mortgage brokers and appraisers apparently received incentive payments such as cash or hidden interest in real estate deals, as well as continued business.

One weekend each year, Pullman residents open their homes to the public for the annual Historic Pullman House Tour. These 120-year-old landmark homes range from executive mansions to14-foot wide worker's cottages to multi-unit apartments, all with a charm and uniqueness that is part of the Pullman experience.

Tour homes are chosen to present a cross-section of the different types of housing in Pullman and the many ways that homeowners blend the past and present in their historic homes. Come visit Pullman and see behind the beautiful facades into the interiors of these landmark homes.

Posted by Unknown at 3:40 AM No comments:

The strike of Hurricane Charley and menace of Hurricane Frances led to delayed closings because home buyers were unable to obtain homeowners' insurance policies.

Help-U-Sell Real Estate announced Thursday that it has broken the 600-franchise mark, expanding its reach to more than 46 states nationwide.

Opening a new office, on average, every 48 hours, Help-U-Sell has boasted a 30 percent growth rate over the past five years, according to a company statement.

Help-U-Sell Real Estate's fee-for-service model allows sellers to select and pay for only the services they want, making it the middle ground between the "For Sale By Owner Model" where sellers do all of the work and pay nothing and traditional brokers that do everything and charge upwards of 6 percent of the sale of the home.

"Sellers want flexibility and affordability when it comes to the real estate process and they're gravitating toward alternative real estate models to get these things," said Help-U-Sell President Rick O'Neil. "Our success stems from our ability to give consumers choices something they've never had before. And our numbers are clearly reflecting this."

The company also attributes its growth to the recent appointment of several new regional directors that were hired to bring individual support and training to offices in their territories. The organization currently has more pending and expects to add at least a dozen more by the end of the year.

Posted by Unknown at 8:23 AM No comments:
Newer Posts Older Posts Home
Subscribe to: Posts (Atom)